On the Air at Maine Lighthouses…Then and Now

The 23rd annual International Lighthouse and Lightship Weekend occurred on August 22 & 23, 2020. According to the Wireless Society of Southern Maine (WS1SM), a part of the American Radio Relay League (the largest membership association of amateur radio enthusiasts in the USA), “The international event, which sees over 500 light houses and lightships activated in over 40 countries, helps promote the preservation of lighthouses and lightships, and at the same time, gives the community an opportunity to experience Amateur Radio.”

The Wireless Society of Southern Maine was on hand at Owls Head Light on August 23, 2020 for the International Lighthouse and Lightship Weekend (ILLW). The Scarborough / Gorham based-group has been participating in the ILLW since 2011, with Owls Head marking the group’s thirteenth lighthouse where they have been on the air at during the event.

In light of it being International Lighthouse and Lightship Weekend and the importance this event means to amateur radio operators worldwide, it seems appropriate to look back in time to 1935 when a young amateur radio operator in the Portland, Maine, area assisted the United States Lighthouse Service in relaying conditions at the storm-ravaged Halfway Rock Light in Casco Bay.

“When telephone cables failed in the recent Atlantic coastal storm, Arthur C. Strout, keeper of the famous Halfway Rock Light, called upon amateur radio to aid him in communicating with his assistant keeper, isolated at the lonely lighthouse.

“Strout was ashore when the storm started. Fearing damage at the lighthouse, he found he was unable to get in touch with his assistant, John Pendell, by telephone, because the cable was out of order. The lighthouse keeper then remembered that Pendell, a radio amateur, had often talked over the air with Perley Swasey, 19, of Falmouth Foreside, Me., operator of amateur station W1GOJ.

“Strout telephoned the Falmouth Foreside youth and asked him to call the assistant keeper, whose call is W1DNA. Swasey began trying to reach Pendell at 8 a. m., but it was not until 10 that the lighthouse station answered. Swasey took a message for the assistant keeper’s wife and another for Charles Brush, superintendent of lighthouse, reporting that the slip at Halfway Rock had been partially destroyed by the pounding waves. He also said that the railing and lights on the slip were torn away as giant waves broke over the rock for more than 18 consecutive hours. Swasey had talked with Pendell many times over the air, but it was the first time he was ever asked to aid the Department of Lighthouses in obtaining Information.”

“Amateur radio was the only means of communication with the mainland when the telephone cable to Halfway Rock Lighthouse (9 miles off Portland, Maine) was made inoperative by a severe storm on November 17th-18th.

“Communication was established by W1GOJ (Falmouth Foreside, Maine) with W1DNA, assistant keeper (John Pendell) of the light. Information relayed by W1GOJ to superintendent of lighthouses said the slip at Halfway Rock had been partially destroyed by the pounding waves. The railing and lights on the slip were torn away as giant waves broke over the rock for more than 18 consecutive hours. W1GOJ-W1DNA handled several messages of importance concerning conditions at the light.”

“When all other means of communication failed, a storm-isolated Maine lighthouse was contacted by a 19-year-old amateur radio operator, with equipment he himself had built.

“Frequently Perley A. Swasey, Jr., had ‘chatted’ with the assistant keeper of Halfway Rock Light. Remembering this, the keeper, Arthur S. Strout, who was caught ashore by the storm, turned to the young owner of short wave station W1GOJ for aid.

“Then for two hours Perley signaled from his Falmouth Fireside (Maine) station. At last he was answered by the beleaguered assistant. From the information Perley obtained, the keeper was able to rush replacements for the damaged light. 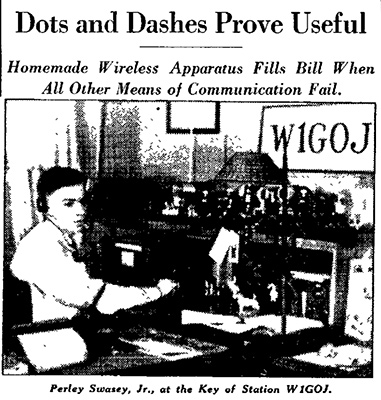 Perley A. Swasey, Jr. with his wireless radio set.

“Modestly, Perley disclaims credit for the job. ‘If John Pendell (the assistant keeper) had not also been an amateur operator, we could have done nothing,’ he says. But Perley’s persistence and knowledge of radio were given due credit.

“From magazines and textbooks Perley taught himself the principles of radio. Three years ago his station was licensed. Though he uses but 100-watts power, the builder-operator has contacted stations in Europe and South America. But he prefers to ‘chew the rag’ with other amateurs in the United States. He has handled many other messages free of charge.”

Connect with us on…